No photos but it's not a backpack, rather a soft PU bag with 2 strap handles and a shoulder strap. You wouldn't want to go hiking with it

Took my 135 on a 3 day "Sottocosta" group rally this weekend around the Mediterranian islands of Ponza and Palmarola with about 70 sea kayaks, me with around 25 lb of camping gear. My first camping trip in it - really appreciated the removal deck for packing. Less bouncy laden in a chop although a bit wetter and not as good for surfing

Was in the lead group with normal sea kayaks ( not racing kayaks) on the 4 nm crossing in a 2 foot chop back from Palmarola to Ponza on the last day. Many, many surprised faces and lots of comments about how fast it was. Very glad I bought it 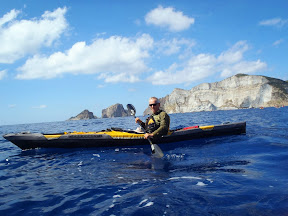 Photo taken in the beautifully smooth seas of the first crossing, when the support boat was carrying my camping gear. Had to lug it myself on the way back...
Simon

thanos wrote:Hello everyone!
Thanks for the amazing review! Could someone post a picture of the backpack the quest 135 fits into ..? i'm considering buying this model for a backpacking trip in Greece and would be very helpful.
Many thanks in advance

Here's a picture of the duffel it comes in: Even if you got a different pack to put it into, it's still a bit bulky for backpacking. A smaller Puffin might work, but even then, it'd be better for trips involving more paddling than packing.
Top

I agree that you wouldn't want to take the 135 hiking

I find that with a suitably large (100 litre) backpack with a proper harness and full length zips, it's very easy to pack the kayak along with spare clothes, a tent, sleeping bag and ground mat, two 60 litre dry bags and kayak accessories. This is ok for me to carry for up to about a kilometer, even when wet. I just did this last weekend to get to ports and train stations. Without camping gear and with intelligent packing, I can also get everything in an 80 litre dry bag with shoulder straps, but it's a bit more hassle, so I usually don't, epecially as my backpack easily folds into a 60 litre drybag
Simon

Thanks for all the info! I thnk i have a better picture now

PS Ditching the standard (high) seat for a foam pad also helps for packing, as well as making the kayak very seaworthy

A quick update...
Just came back from my first experience of surfing biggish beach waves in my Quest 135. Had to be a bit careful as I forgot my helmet and what started out as nice 4 footers had a nasty habit of peaking to steep 6 foot dumpers with the safe run off area to the right over a rocky bottom, so chickened out after a bit, but anyway....
It's taken my surfing skills to a new level for me. It takes off on waves more easily than either my F1 or my Narak - I actually caught one wave while I was sitting still, which was a first for me, and... finally a skin on frame boat of mine that will surf diagonally down a wave face, which is just as well as although it doesn't purl (nose dive) easily, the bow is only slightly peaked and one of the bigger waves was so steep I came close to getting the bow under while still initially perpendicular to the wave. I was thinking about buying a P&H Delphin until today as I was so sick of my mate being able to surf diagonally in his while I couldn't in my F1. The Quest also feels quite drama free (less nervous) on a wave compared to my F1, perhaps because it flexes a bit more and the sponsons give a smooth ride. The F1 is still better at resisting purling due to the big volume bow but broaches much earlier if not perpendicular to the wave.

The 135 was also very stable and forgiving side on in a steep breaking wave I didn't get off in time. Even though the surf was at shoulder height and I was thrown off balance so braced on the wrong side (away from the wave), I managed to stay upright by leaning into the foam.

On the way back to the marina, I caught some swells that I would have missed in my other kayaks, and was impressed by its secondary stability in waves rebounding off cliffs (clapotis). Although the bow gets thrown about more than my F1 by waves breaking side on, I had to brace lees than I did last weekend in my F1 in similar conditions, which surprised me as the F1 is very good indeed in rough water.

Thank you so very much for all the detailed information. Forgive me if you've covered this, but I'm curious about something: How well does the deck seal work? From what you've described, I'm getting the impression that it seems to work well, but don't remember seeing this specifically described.

Thanks again for all the detailed info

Good question. I think I've answered it before somewhere but to cut a long story short some water does get in in surf or breaking waves, but generally not enough to worry me. At first I thought it was more noticeable than it should be but then I fitted a better spray skirt (Reed thin neoprene from my Nautiraid Narak) and it improved considerably. I carry a microfibre cloth with me and wring it out every so often if I feel like it, but not because I have to, even when side surfing last weekend, but then I'm quite light at 145 lbs so freeboard is ample. The only time I think I need to use the pump is after multiple rolls when I'm practising, and even then I just use the cloth sometimes.
I agree that it's not ideal and I'd prefer a heavier deck with waterproof zippers, but the dynamic qualities of this kayak are sooooooo good, at least for my wants, that it's very easy to live with it. A detachable deck and free floating sponsons also means it dries aout really quickly, important if you have to carry it any distance, especially uphill!
Simon

Thanks Simon. I'm still uncertain which kayak I am taking to England next June. The weight of that Pakboat is attractive.
Tim
Top

I think at your weight, Tim, you'd have a blast paddling the Quest 135. At 145 lb I have more fun with it unloaded than loaded, but it's still fine with an extra 25 lb of camping gear, just a bit less reponsive and a bit less bouncy in a chop. The only caveat would be if you are a powerful paddler who can easily average over 4 knots for hours, like Tsunami Chuck, in which case you might be a bit frustrated by the limited hull speed, even though it does have a long waterline and is fast for its length


I know, get one now and start having fun with it immediately, then bring both it and your Greenlander over to the UK when you come over and sell me your Greenlander while you're over this side, that way I'd cut down on courier costs to Italy

Took the Quest out surfing again on the weekend. Discovered a limitation that perhaps applies to other folders in surf. Once I'd got a diagonal line set up on the smaller 3 foot or so waves I was surfing, it was very difficult to change direction again (cut backs). My mates watching me said they could see the hull twisting as I edged the kayak, which meant that my input wasnt translating to the hull in the water. Has anyone notice this with folders in surf? Thinking of the TRAK in particiular. It's odd as the Quest feels quite rigid normally, but of course it could just be (my) poor technique. Got dumped a couple of times too in breaking waves so feeling less cocky now about side surfing. When those sleeves for the gunwale tubes get sand in them it's a real pain to get it out when you're cleaning the kayak afterwards.
Simon

siravingmon wrote:Took the Quest out surfing again on the weekend. Discovered a limitation that perhaps applies to other folders in surf. Once I'd got a diagonal line set up on the smaller 3 foot or so waves I was surfing, it was very difficult to change direction again (cut backs). My mates watching me said they could see the hull twisting as I edged the kayak, which meant that my input wasnt translating to the hull in the water. Has anyone notice this with folders in surf? Thinking of the TRAK in particiular. It's odd as the Quest feels quite rigid normally, but of course it could just be (my) poor technique. Got dumped a couple of times too in breaking waves so feeling less cocky now about side surfing. When those sleeves for the gunwale tubes get sand in them it's a real pain to get it out when you're cleaning the kayak afterwards.

Though this is based on my limited experience and understanding of folders, I would venture to say that the vast majority of folders probably don't do well in surf because most are at least somewhat flexible. I had a Folbot Cooper that didn't seem to do very well in anything more difficult than moderately turbulent conditions. While the flexibility was actually beneficial in light-moderate turbulence, in rougher conditions and stronger current it was somewhat more difficult to control and maneuver; because of the high flexibility it tended to go where the water was going rather than where I wanted to. I would never, ever have taken my Cooper into surf - it would've been thrown around like a big piece of cardboard.

The only folder I know of that seems capable of handling heavy surf is the Trak; supposedly it can handle just about anything.

Thank you for your continued updates.

'I actually read the Bible quite frequently. Can I tell you why? I stay in a lot of hotels. And I like to scare my kids before bed.' Jon Stewart
Top
Post Reply
43 posts