For selling folding kayaks and related items. No eBay links, and no commercial ads, please. Please include an asking price with all For Sale posts. And please mark sold items as SOLD in the header!

(If you make a sale, how about making a small donation to the site?)

Nice boat, probably out of my price range. What are you asking for it?
Top

Not sure if you're selling your Kurrent or reminding people how beautiful these kayaks are. Great photo! That blue deck is amazing. There are more practical kayaks out there in terms of assembly time, cost and support but few boats in a bag that have the looks.
Happy New Year Jake!
Top

I intended to upload a photo of my Kurrent with pertinent details perchance to find a buyer for this excellent little boat but became uncertain as to whether I wanted to sell it. I asked Michael if he would delete the photo while I thought it over for a time. In essence, the problem is one of dilapidation, not the Kurrent’s but my own. In a couple of weeks I’ll have entered my 79th year on this lovely, watery planet and the body, as bodies will in their late years, has become increasingly less flexible which makes scrabbling about trying to put together the tight fitting Feathercraft something of a painful challenge. The Kurrent is my winter-in-Florida boat and before that it was an old K-Light that I paddled there. So long as we were able to rent a condo with a garage where I could safely shelter the folder, I only needed to assemble it once, shortly after our arrival and then take it down a couple of days before leaving. But, Anna Maria Island has been “discovered” and rental prices have soared. This winter could well be our last with the luxury of a one car, one kayak garage. And, to that end, I may have to find some sort of folder/inflatable that is both light weight and quick to assemble/disassemble each time I want to go out for a few hours of paddling. The Kurrent is a lovely, superbly crafted boat and I know that I will surely miss it. Perhaps I’ll repost the classified after we get down to AMI next week. Price will be around $1600 which is more than a thousand less than I paid for it.
Top

Hi Jake,
I can't blame you for being hesitant. I owned a K-Light before my Big Kahuna and I was always impressed with how the K-Light handled despite the shorter waterline. I'm guessing the Kurrent is similar to the K-Light's characteristics with the added beauty of the upswept bow, making it a very sweet kayak.
Maybe this decision not to sell yet will give you more time to find that "perfect" kayak for your needs and still enjoy some more paddling with your Kurrent.
Top

Hi Jake,
Soooo, the dilemma continues? If you recall, we were corresponding about your Kurrent for quite some time last year. My situation is I have several folding boats and don't really need the Kurrent. On the other hand, I'm a long time lover of all things Feathercraft (and still have a K-1). However, Doug Simpson has pretty much stopped his replacement parts business at Feathercraft. Bottom line is that I just don't think they are worth what they used to be. For example, I paid $1100 for my K-1 (latest version) -- which is their best expedition boat -- that was (and remains) in almost mint condition. And I bought another mint condition Big Kahuna (with both hatches and rudder) for one of my buddies for $800. Both on Craigslist.
Are you down in Florida now with the boat? I ask, as I have my annual trip down there for about 10 days in a couple of weeks for the Folbot Flotilla -- a long time gathering of kayak sailors and paddlers from all over the country -- out of Flamingo (in the Everglades). Normally I live in Raleigh, NC but will be driving down this year. Where are you exactly?
BTW, I have two quality inflatable boats that are very easy to assemble and paddle that you might be interested in. One is a double Grabner Holiday in perfect shape. Grabners are made in Austria and are some of the very best inflatables ever made. New ones go for around $2300. Weighs about 36 lbs and is about 13.5' long and has a rudder. The other is an Innova Helios I -- without rudder but in perfect shape and weighs just 29 lbs, at just over 10' long. Innova makes very nice inflatables for the money. They've been around a long time. I also buy many boats just to test them out -- one of my many "boating hobbies". One I think you might like is the Sea Eagle Razor 393rl. See at https://www.seaeagle.com/RazorLite.
Anyway, feel free to contact me if you want to try to work something out -- straight cash or trade + cash.
Sorry to hear your great winter getaway has become so expensive. It sounded great!
Also sounds warmer than usual down there right now -- and thus -- still VERY buggy !
Best,
Jeff Robinson
jeffreyraleigh@yahoo.com
919-414-4350
Top

Paddling qualities of the Kurrent and K-Light are similar. The build quality of my Kurrent is better than the old K-Light that I paddled for a couple of winters. The K-Light’s cordura deck was not watertight and the hard plastic coaming could be difficult compared with the Kurrent’s “soft” coaming. Larger paddlers will be happier with the Kurrent’s larger cockpit but, at 5’10” and a bit less than 145 pounds, I actually found the K-Light’s smaller cockpit more secure. Of course, I could install my bracing bars but I haven’t. Maybe I should consider buying a couple of used K-Lights keeping one on top the Forester for three months, heedless of the Florida sun and sea gull droppings. The other K-Light could be cannibalized for spare parts if it came to that. Just sayin’

I certainly remember your interest in my Kurrent. I actually had an offer for full price from a fellow in Hong Kong and he would pay shipping, but I became suspect of the transaction for reasons that are better left unsaid. I terminated the sale and, thus, still have the boat. And, as it stands now, I think Jeremiah’s point is well taken. I hope to be down on Anna Maria Island and paddling the Kurrent upon those pellucid waters on my birthday next week. 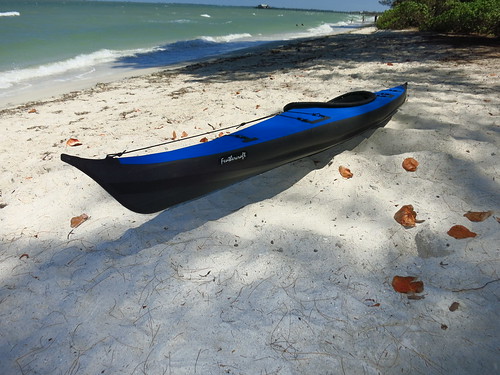 FC prices used in Germany, have been monitoring about three years now:

Kurrent normal (not 2.0): they never appear, a friend bought one for about 1650 Euros. Kurrent 2.0 would be about 2000 Euros, given that has normal skin and alloy and is by far one of the easiest to build for daytrips.

Wisper XP: Never appear. I saw one for about 2900 Euros that was sold in two days or so.

Heron: Someone bought one for about 4000 Euros in a fourm, only one I know about.

Here in Germany FC holds prices very well, maybe because there aren´t so many like in the US or Canada.

There are not many brands that can hold them the water, as we say in Germany, Trak, Nautiraid, some Nortik stuff maybe.Apart from Klepper and Pouch but they are from wood and heavy and not as fast.

So you have a very rare and extremely good boat that should be clear! Give it to good hands!

Jake: Get yourself an Aironaut. I have one and since them I have not been using my other boats much. Best compromise, fast, easy to build, save and light, easy to dry. I have been testing a lot out. Concerning the seams? Just let some aire out when you are out of the water or put that inflatable in the shade. It´s not that much to worry.

I would not opt for dropstitch as they are difficult to repair. Helios I: I had it, to small and not fast enought, too heavy vor size.

The old Safari would be good or the new one. Way more versatile and the old one was quiet quick. You can crawl back in and is self bailing, nice for playing in the waves.

Gumotex is about to bring out the Gumotex Rush here in Europe. That might be worth too look.

The Holiday II by Grabner is ok, but the bottom is to flat, that rudder is cumbersome, but at least it has one. Too heavy. I have a Semperit Forelle III, that is much lighter, better material, real classic that Audrey Siutherland was using. Still holding amazingly well, I much prefer the Semperits to the Grabners.They are also lighter and smaller to pack.

But the best inflatable is the Aironaut, at least in my experience. The seat is very confortable, its fast, save, directional stable, well build, light and packs quiet small. The pumping time is also shorter because it´s less air in it than in the Safari for example.

Get back to Doug as long he is still there and get one if he has still one left.

I wish you clear and good decisions!
Top

Yuen, Thanks for all the good info about folders and inflatables on the European market. If selling it here proves difficult, I can always give the boat to my wife’s Dutch son-in-law who runs a package consolidation service called USA2U. He gets commercial rates with FedEx and UPS and shipping to Hilversum shouldn’t be too expensive. He can find a buyer for the Kurrent somewhere in Europe, most likely The Netherlands or Germany and then apply the proceeds of the sale toward airfare for the family on their annual visit to the Jersey Shore. The only thing I’d ask is that he bring a quantity of good Dutch cheese with them when they visit.

I’ve already sent an email to Doug Simpson asking if, perchance, he had an Aironaut lying about that he might want to sell but, so far, I’ve not received s reply. I think that the light 420 denier hull would be OK. Anyway, I always use a paddle float when entering or exiting my Kurrent because, unlike a hard shell, it’s too difficult to knuckle-walk a folder into the water and doing so will likely scuff the hull.

I would like to see Gumotex/Innova come out with something similar to the Aironaut, about 14 feet in length with a maximum width of 28 inches with the option of a detachable deck like their most recent kayak, the very cool looking, black-hulled Rush. At the moment, I’ve been searching about for a good used Safari of the model that proceeded the Safari 330. I prefer the 28 inch width but, if I can’t find one, I’ll order a new Safari 330 from The Boat People. It’s a bit beamy for my taste as is the new Rush but I suppose they would both perform well enough.

Anyway, we arrived on Anna Maria Island yesterday, Same condo as last year with the one kayak, one car garage. I should have the Kurrent assembled and ready for winter’s first paddle no later than tomorrow afternoon. Looking forward to the event.

I just got a note from Doug S. Said he has one new and two used Aironauts but he’s hanging on to them, at least for now.
Top

Where's the original post with sale information? All I saw was John Sand's post at the top, then numerous replies.
Top

Hi Jake. I would like to buy your Kurrent. I live in FL and am hoping we can arrange a cash and carry. Please email me at harpomorris@gmail.com so we can discuss the details. Thanks, Jeanne
Top
Post Reply
11 posts • Page 1 of 1

Return to “For Sale: Folding Kayaks and accessories”