A place to ask about trips you're planning

one chapter ends... another begins

My father-in-law passed away a few hours ago. I'm in El Paso on the next flight home after a few days in Juarez. My wife was crying when she called me but she's since composed herself and in true Sandy fashion, is wrapping up stuff at work in preperation for the trip to Sao Paulo.

Her father and family has suffered quite a bit since his health declined. I'm glad that we can close this chapter and move on to the next one in our lives. A few people of posted encouraging and kind words here or via PM. We appreciated all of them.

If you are fortunate enough to have one or both of your parents still around, make sure to tell them that you love them when you talk to them again.
Top

Well, I suppose it time to update this thread. There's been a lot of water under my keel since I joined this site and I've progressed from not knowing much of anything and being pretty much out of shape to knowing a little more than I did a year ago, I've become a little more physcially fit and, the best part is that I've met and paddled with a couple of ya'll.

Our plans for Brazil have progressed passed the dreaming stage to the firm-we-got-dates-and-reservations phase. I've conned ... err...talked four others into joining me on this trip. Kevin aka Bill the Duck, who posts here occasionally, Chris aka kavakamper, Richard aka the Georgia_Kayaker and Paul aka BrazilBrasil. The last two fellows are better know on p-net and I'm sure that Tom Yost will recognize Paul's name.

We're lucky to have Paul along. He's married to a Brazil and speaks fluent Portuguese. He was either born in Brazil to Amerians working there OR he lived there as a young child for a period of time. Either way, we're happy to have him along.

Can't say enough about Richard - no nonsense when it comes to paddling and I think his motto is "shut up and paddle". Richard is about 60, an ex-Navy seal with a long service history in Vietnam. He paddled with Chris and I on the Alabama trip and I think I can speak for Chris when I say that we certainly enjoyed his company.

The first three of us noted above already have flight reservations. Chris is lucky - he can now fly from ATL straight to Manaus - that's a brand new route with service starting in Dec. Rumor has it that Chris is flying in business class where the Grey Poupon is served.

Kevin & I will take the scenic route from here to LA to Panama to Manaus and on the return, we'll go w---a----y south to Sao Paulo and return via Houston. We'll be in the back of the plane with the chicks....chickens. Yeah - that's it. Chickens.

Since Dave never voluntered to ship his mothership to Brazil, we decided to rent one there. It'll be a small Brazilian riverboat much like this one:

Nothing fancy - we'll sleep in hammocks and I'm sure we'll eat a ton of fish, rice and beans. Eight days and seven nights and the boat will go where we want it to go. That'll be interesting eh? Our first monsoon storm on such a small boat will be interesting also.

The area that we'll probably focus on will be the Rio Negro to the northwest from Manaus:

For scale, I drew in a yellow line that's 5 miles long. We'll also take advice from the locals if they mention something to the south that is interesting.

Outside Manaus, you can see the Meeting of the Waters where the Rio and the Amazon mix. Very distinctive - something you don't want to miss. We'll see the Amazon Theater in Manaus and hopefully, the pink dolphins in Novo Airao. I've already seen two of the three items listed and, well, I guess if dead pink dolphins count, I've seen all three. I don't count dead dolphins though...

I'm seriously thinking about leaving the Long Haul in Manaus - for the next trip.

Yup, it's actually happening! This will be a trip of a lifetime. Gerry, it sounds like our trip in Southern India my wife and I did in 2004. The chase boat stayed nearby, but we were on our own except for a few suggestions from the outfitter and locals. http://tinyurl.com/5k3d3z

I guess the next step for us is the planning and then the long wait until we head South. Lots of time to get familiar with Portugese I guess

kayakamper wrote:Lots of time to get familiar with Portugese I guess

We'll be mostly isolated from everyone else and I understand the boat captain will speak English.

Still, a few words never hurts.. like "Beijos to Beth."

It's going to be a great trip - my only regret is that it isn't next month instead of next year.
Top

Starting to think about Manaus again. It is early in the game, but I hope we all ( those of us going ) can get together ( in person or by conference call or on this forum ) to start the planning in the next few months.

I figure by sometime in January we should have an idea about developing an itinerary for the trip.

This trip will be fun!

Another update... as I noted in another post, Bill the Duck broke his neck in three places.

That'll teach him to stay out of those three places. (bada boom - don't forget to tip your waitress - I'm here all week!)

Anyway, Kevin is out of his halo, has done his time in the soft collar and is in PT. He needs to have his shoulder looked at but I think he'll be fine. We'll get him back on the water in a few weeks to get in shape. Well, "round" is a shape for what it's worth - he needs to get in another shape.

I'm still working out several days a week. When I started in late July 2007, I could leg-press only 155 pounds. A month ago, I maxed out the machine at 400 pounds. I may have to change machines if I want to go for more weight - we'll see. I also maxed out the back extension machine at 300 lbs but I've backed off of that much weight - I'm more scared of a back injury than anything else. I'm up to 120 crunches - with 80 pounds of weight on the crunch machine. I do several other machines as well as half an hour (3.5 miles) on the cross-trainer. I feel better at 50+ than I did when I was 30.

Kevin and I are on the same flights - PHX to LA to Panama City to Manaus on July 1. We return via Manaus - Sao Paulo - Houston - Phoenix. Kavakamper is lucky - he flys from Hotlanta directly to Manaus and if my memory is correct, he's flying with Carlos - a kayaker friend of Paul (Brazil-Brasil) - both from SC. Paul doesn't have reservations (yet) and we're waiting to hear from Richard G - the last member of the party.

We had a call with the guy in Manaus who is setting up the boat and motel. He represented himself very, very well. I think everyone's excitement level increased five-fold.

Just picked up " A narrative of travels on the Amazon and Rio Negro" by Alfred Russel Wallace at the library. A very old book, but some interesting insite of the region as well as great story telling.

K7, sounds like I need to get on the excercise kick soon as well as a regular paddling routine again now that Spring is here.

Just returned from the Okeefanokee Swamp where we paddled for a couple of days.

Well, here it is April 27 already and just a few short weeks away from Brazil and the Rio Negro. I picked up my Visa today and am now officially ready to go. Now I just need more time in my boat and start making my lists of items to take.....and that's it!

I purchased a Sportube 3 and will use that for the long parts of the Long Haul and my paddles. The hull and other wooden parts will go in one other bag with the PFD and knife. I'll try to stuff everything else into one carry-on bag including the electronics. At least this is the plan.

There's a small chance that I'll leave my kayak in Manaus or Sao Paulo - I guess it depends if we plan to return in 2010 to kayak from Manaus to Santarem.

The Sportube just arrived. It may be large enough for two sets of Long Haul kayak parts - at least the long ones. It would weigh a ton though.

I think I'll try it with one, add my pfd and other bits along with the paddles - that should be eough to tip me over into the extra baggage fee category.

Most of my kayak will go in the Feathercraft bag, I am taking two 4 pc paddles. I am fortunate to have two 70 bags allowed on business class, so I have plenty of room.

It's a snowboard case that adjusts to various lenghts. 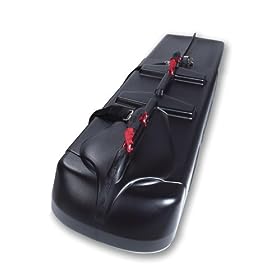 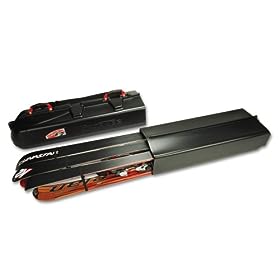 We're allowed (edit) 70 lbs to Brazil per bag so the extra weight won't hurt too much. For domestic trips, I'll ship it ahead by ground.
Top

Wish you all a nice trip. Hope for a comprehensive report with lots of pictures, perhaps with daily updates, if internet is available in the area.
Top

gregn wrote:Wish you all a nice trip. Hope for a comprehensive report with lots of pictures, perhaps with daily updates, if internet is available in the area.

Thanks bud. The Rio won't have internet access and I refuse to carry a laptop so updates may have to wait until we get back. I suspect it'll be like the Alabama reportwhere we'll tag-team it upon our return.

Looking forward to our Willow Beach trip next year. It'll be my second trip there.
Top

Return to “Questions and Trip Planning”